Encouraging a culture of ethics where employees can safely speak up

A September 2014 independent assessment by non-profit organisation Blueprint for Free Speech rejuvenated debate in the compliance industry when it found that a considerable number of the world’s G20 countries have no specific laws protecting people who flag illegal activities or unethical conduct such as corruption, bribery and fraud within a private or public entity.

Every year well-known companies are fined hefty sums of money by regulators, reach expensive settlements or have their reputations tarnished after they are found to have engaged in unethical business conduct. And, because there are no laws to protect them, the people who witness these wrongdoings are afraid to report or expose such conduct, meaning the illicit practices often go on for a long time before they are eventually detected by internal or external auditors.

For example, in Argentina, Brazil, Germany, India, Indonesia, Italy, Mexico, Saudi Arabia and Turkey, there are no enacted whistleblower protection laws to protect truthtellers from reprisal or retaliation. In countries where whistleblower protection laws are being proposed, there is little or no publicly-available information to indicate when such proposals will become law.

The lack of enacted laws in countries considered as developed, democratic and socio-economically stable, including the United Kingdom, France and Germany, is a source of concern because it serves as a bad example to countries seen to nature a poor compliance culture, like Saudi Arabia, Estonia, China, Nigeria and Ecuador.

Even in jurisdictions where whistleblower protection laws exist, like in the United States, Australia, Russia and South Africa, the financial rewards for anonymously reporting and exposing such vices are very little or uninspiring, to the extent that whistleblowers do not report wrongdoings and illicit activities go unreported.

Before whistleblowers report illegal activity within an organisation, they will first weigh up their safety options and determine what is at stake for them. Whistleblowers will normally ask themselves a series of personal and professional questions before they decide to report a wrongdoing, such as: 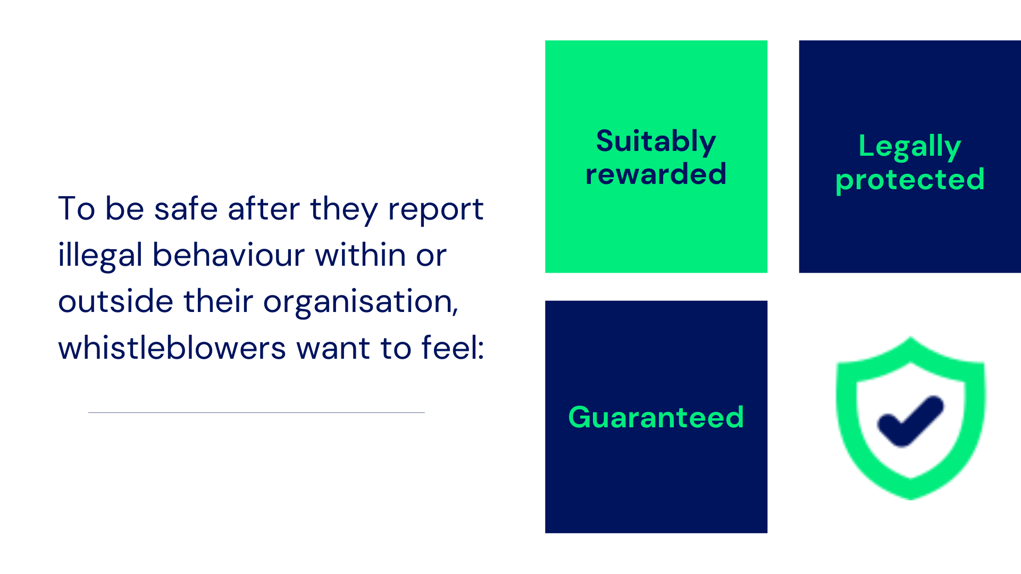 While the lack of existing whistleblower protection laws in some countries may be seen to deter from a culture of high ethical standards and integrity in private and public organisations, some companies and civic organisations are taking steps further by developing tools and solutions that encourage whistleblowers to report wrongdoing anonymously and without fear of exposure. Even in countries where there are no whistleblower protection laws, companies are investing in tools, solutions and platforms that can help employees, truthtellers and general citizens report unethical conduct without paying the price.

One platform that has been developed, known as Speeki, uses artificial intelligence to conduct cognitive interviews with whistleblowers, to help companies take faster and more successful investigation steps.

Given the seemingly slow pace at which whistleblower protection laws are being enacted in most countries, including G20 countries, companies should not be deterred from formulating and implementing certain reporting mechanisms, including:

To request a free demo or trial of the Speeki whistleblowing platform, contact us here.

Looking to install a whistleblowing solution? Here is w...