The whistleblower who saved a bank

In 2001 Dennis Gentilin was a Monash University graduate fresh out of National Australia Bank’s trainee programme, having landed a coveted role on the bank’s foreign currency options trading desk in Melbourne. Within a year, however, Gentilin had grave misgivings about his unit’s habit of consistently misreporting transactions in order to reduce fluctuations in daily trading profits and losses, known as ‘smoothing’. He eventually raised his concerns with a senior manager but was immediately brushed off. As the most junior employee in the unit, Gentilin naturally questioned his own analysis of the situation.

Gentilin was later transferred to work in the bank’s London office. It was there that he consulted with a colleague outside of his immediate team and realised that he needed to be brave enough to persist in his reporting of unethical behaviour. He could no longer ignore his own judgement and blew the whistle on his unit’s misreporting of profits and losses.

Eventually Gentilin’s whistleblowing revealed a massive AUD326 million trading loss at the bank. National Australia Bank’s chairman and CEO resigned, four individuals on the trading desk were convicted at trial and, most devastating of all, huge reputational loss was suffered. The Australian Prudential Regulation Authority required the bank to take 81 remedial actions, and the foreign currency options trading desk had to be shut down for over a year. 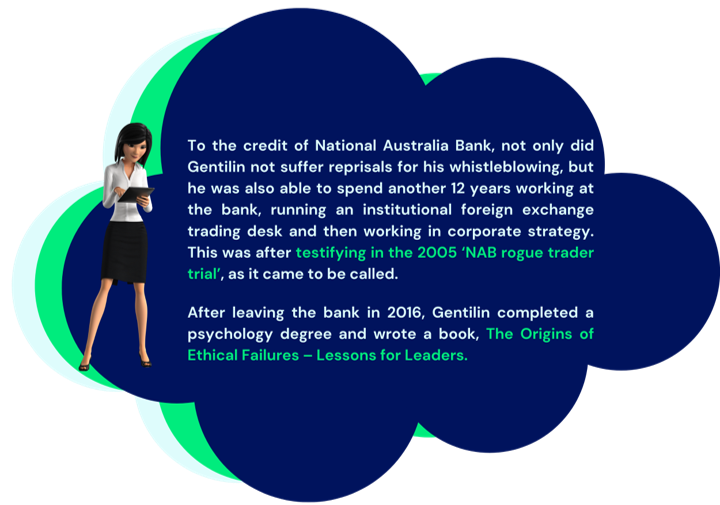 In 2017 Gentilin was invited to give testimony at the Parliamentary Joint Committee on Corporations and Financial Services in his capacity as a private citizen. Regarding his experience as a whistleblower at the bank, Gentilin stated in his testimony, ‘I was also very fortunate to have a group of individuals around me who understood what I had been through ... Instead of seeing me as used goods to throw on the scrap heap, they saw me as someone who had potential and kept providing me with opportunity. That probably played a big role in me remaining at the National Australia Bank for a further 12 years subsequent to the incident.’

Whistleblowing is never an easy subject to discuss, much less implement in a corporate setting. But it does make firms more ethical and ultimately stronger as sustainable corporate entities with integrity. In 2020 National Australia Bank ranked in the top 4 in Australia’s banking industry in terms of sales, profits, assets and market value, and as the 42nd-safest bank in the world.

All publicly-listed and large proprietary companies in Australia are already subject to the Treasury Laws Amendment (Enhancing Whistleblower Protections) Act 2019, which amended, consolidated and broadened existing whistleblower legislation. Now that over a year has passed since the Act’s implementation deadline, companies should review actions already taken with a view to upgrade, streamline and/or otherwise improve on their whistleblower programmes. Organisations not covered by the Act would be well advised to review the whistleblower regime as a best practice.

The ability to anonymously, easily and securely inform without the fear of reprisal is the cornerstone of any whistleblower regime. Regular training reinforces the message that senior management is committed to integrity and ethical behaviour, firmly setting the tone from the top, while outsourcing whistleblower hotline management to a professional third-party service provider increases trust in the entire regime.

As reported by the Harvard Business Review in January 2020, researchers from the University of Utah...
Read More

What’s in that whistleblower report?

Since the Sarbanes–Oxley Act was passed in 2002, all publicly-traded companies in the United States...
Read More

EU whistleblower protection – what a difference a year will make

By the end of 2021, employees in the EU will be protected from whistleblowing retaliation by virtue...
Read More