Whistleblowing legislation in Australia one year on

All publicly-listed and large proprietary companies in Australia are subject to the Treasury Laws Amendment (Enhancing Whistleblower Protections) Act 2019 (Act), which amended, consolidated and broadened the existing whistleblowing legislation. The deadline to implement an Act-compliant whistleblowing policy was 1 January 2020.

Unlike a number of very successful United States whistleblowing regimes, there are no monetary awards offered to informants in Australia. And unlike European whistleblowing policy, no whistleblowing protection supervisory authority has been established in Australia, nor are public-sector and smaller companies included in the legislation. Critics have suggested that adding these measures would greatly increase the efficacy of the Act.

What changed in the past year?

Since the Act was enacted, there have been a number of changes, these include:

> Former employees, contractors and suppliers, dependents and other family members are now stakeholders who are eligible to file whistleblower reports.

> Whistleblower protection has been extended to informants who file reports using any number of pathways, such as the Australian Prudential Regulation Authority, the Australian Securities, and Investments Commission or a third party whistleblowing service provider.

> Anonymous reporting is now available and, while a ‘reasonable grounds’ disclosure requirement remains, there is no longer a requirement to prove ‘good faith’ in reporting.

> There is an emergency disclosure regime in place for disclosure to the media or parliament in certain situations, such as an imminent environmental disaster.

> Access to compensation has been increased in the event there is reprisal or retaliation for whistleblowing.

> Significant penalties have been introduced, including fines of up to AUD10.5 million for breaches of the whistleblower protections afforded under the Act and up to two years’ imprisonment for certain acts that contravene the Act.

Time for a health check

Now that a year has passed since implementation, companies would be well advised to review and improve (if appropriate) the actions they have taken to implement the enhanced whistleblowing legislation. A health check is recommended during the first quarter of 2021 to determine whether already-adopted actions can be upgraded, streamlined and/or improved.

The following are some key things to consider when conducting the health check: 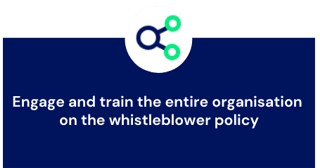 > At least annually, engage with and train the entire organisation (from senior management to trainees) on the whistleblowing policy, emphasising the ability to report anonymously and without reprisals, in order to foster integrity and an ethical business environment. Take the opportunity to seek and review post-training feedback and make changes where appropriate. 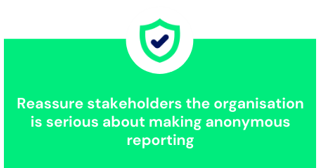 > Reassure all stakeholders that the organisation is serious about making anonymous reporting and reporting without reprisals easy and efficient. If you have not already done so, delegate whistleblowing hotlines to third party service providers who are well versed in the sensitive business of whistleblowing. 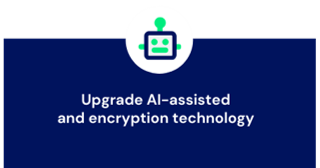 > Upgrade AI-assisted and encryption technology to the most up-to-date versions available to ensure consistent and secure treatment of information with 100% adherence to established protocol. 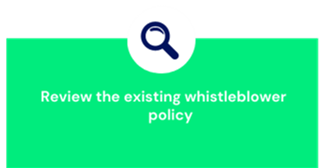 > Review the existing whistleblowing policy to ensure that it is comprehensive and fully compliant with the Act, that procedures to protect disclosed information are appropriate and secure, and that investigation and follow-up procedures are transparently written up. Most importantly, test that everyone in the company is aware of how whistleblowing can be done easily, securely, and confidentially.

To request a free demo or trial of the Speeki whistleblowing platform, please contact us here.

Your role in the company whistleblowing programme as a ...